The Blue Angels and Thunderbirds and other military demonstration teams are scheduled to participate in 2014 Air Show Season including the 2014 EAA Oshkosh AirVenture.  The Gavin's are already working with EAA on some 2014 Oshkosh AirVenture event design possibilities looking forward to a great event. Stand by for updates and there are still a very few 2013 AirVenture shirtsavailable. Contact the Gavin's for more information.

Posted by Unknown at 9:50 AM No comments: 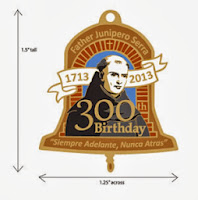 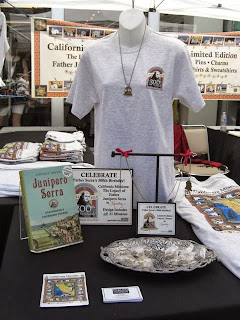 Father Serra's 300th Birthday, November 24, 2013 is one month away.  Kimberleigh created the celebration's signature designs and memorabilia to support the Missions (see the list)  and events including the  Huntington Library's Serra exhibit in San Marino, CA, and other organizations including Mallorca 2013. There are many activities still planned - some are listed on the California Missions Foundation web page.  Read more about Kimberleigh's involvement and designs and if you are a California Mission fan be sure to get one of  Kimberleigh's 300th Serra Birthday pins, pendants or the T & Sweat shirt with the Serra Mission Legacy design - the only one ever created with all 21 California Missions, their locations and founding dates on Kimberleigh's 300th Serra Birthday Page.

Yosemite National Park opened in time for the Gavin's 20th wedding Anniversary and possible return visit next week.  Yosemite played a big part in their lives, especially Kimberleigh's.  Married in the Valley at the Yosemite chapel, they returned each year for their anniversary, and when Vizsla's Claude & Chloe came into their lives they continued the annual visit, staying in dog friendly cabins.  When Chloe died suddenly in 2009 they decided a change was best and began vacationing in the Eastern Sierra instead with Claude who passed in early 2012.  This being the 20th Anniversary they decided it might be time again.  Yosemite is also the subject of many of Paul's paintings and Kimberleigh's designs, including the Yosemite Hawaiian Design.

Posted by Unknown at 2:45 PM No comments:

Kimberleigh and Paul Gavin of Gavin Arts are pleased the Department of Defense and the US Navy have announced the Blue Angels will fly a 2014 Air Show Schedule. The Sequestration and its canceling of the Blue Angels, the USAF Thunderbirds and all military performance and even static display participation in air shows for 2013 caused many air show cancellations and dealt a blow to many individuals, companies and cities across the country and prevented individual military units from generating much needed additional funds for family needs and activities.

Paul began supporting military units and events in 1984 at the Blimp Hangars at MCAS Tustin, and Kimberleigh joined him when they married in 1993 with the 1993 MCAS El Toro Air Show and the 1993 25th Anniversary TopGun design and they have done it ever since.

This will be good news if it actually happens.  Let's hope it does.
Posted by Unknown at 7:46 AM No comments: 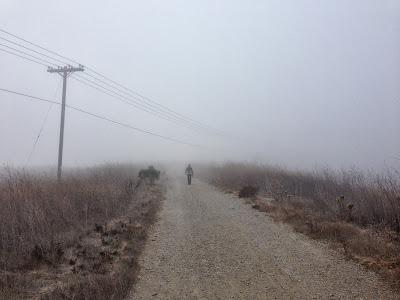 Kimberleigh walks into the fog on her early morning walk.  Much moisture and thick mysterious atmosphere.   The mornings here lately have been very thick. 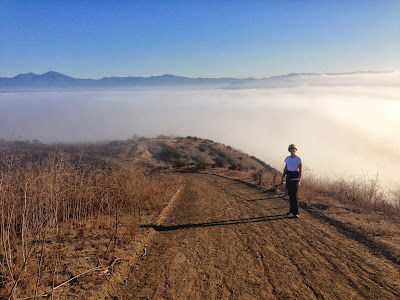 At the top it's a different story.  Makes for a good perspective and a better day.

Note Saddleback in the distance.
Posted by Unknown at 8:54 PM No comments: 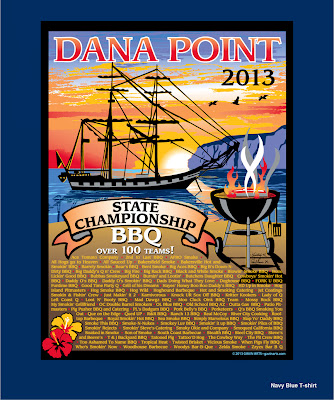 Kimberleigh's Gavin Arts 2013 Dana Point State Championship BBQ Design features over 100 teams as the event becomes one of the largest State Events.  Teams come from all over the state and across the country to participate.

This event happened October 5, 2013, in the Sea Terrace Community Park, Dana Point CA.  The whole neighborhood smelled wonderful and a great time was had by all.

For more information about the 2014 event go to the Dana Point BBQ web site, and to get one of the few remainingT-shirts and hats go to the Gavin Arts Dana Point BBQ page.
Posted by Unknown at 2:18 PM No comments: 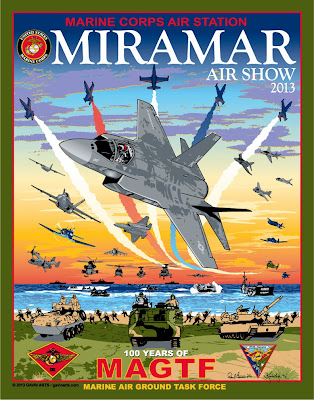 The image celebrates 100 years of MAGTF (Marine Air Ground Task Force) featuring the Marine Corps F35B version in the VMFA-121 Vikings markings (slightly edited - placed on inside of the tail to ensure it could be seen at this angle) and many historic and current air, land and sea elements of the Marine Team.

The 5 jets leaving the red, white and blue smoke trails are the Patriots Jet Team who were scheduled to appear as the Blue Angels had been grounded for the 2013 Air Show season due to Sequestration.
Posted by Unknown at 1:48 PM No comments: